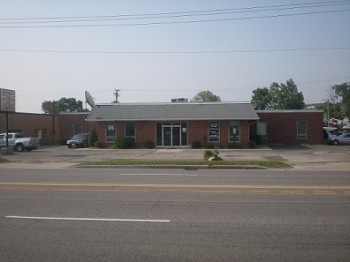 (This archived article was published in 2014.  More recent data is found in the articles section of our web site). Taken in total, the Chicago metropolitan area office market appears to be making some very modest gains. Office average rental rates have improved slightly in some areas. Office space deliveries are up (albeit vastly below 2009 levels) and there has been a slight positive absorption of office space in 2012 and 2013. When working on Chicago office tax appraisals in the south suburbs, however, we often see a very different picture. The vast majority of the Chicago office market conditions improvements are taking place in the downtown area. The downtown Chicago office market makes up a huge percentage of the Chicago metropolitan office area index which skews results. In many areas of the south suburban office market we continue to see declining rents, declining occupancy levels, negative absorption and virtually no new office deliveries. The charts below shows Chicago office market conditions as a whole (left) with the 29 high tax south suburban communities having composite property tax rates that are 14% and above (right).High tax communities: Bellwood, Burnham, Calumet City, Calumet Park, Chicago Heights, Cicero, Country Club Hills, Dixmoor, Dolton, East Hazelcrest, Flossmoor, Ford Heights, Glenwood, Harvey, Hazelcrest, Homewood, Lansing, Markham, Matteson, Maywood, Olympia Fields, Park Forest, Phoenix, Richton Park, Riverdale, Sauk Village, South Holland, Stone Park, and Thornton. As Chicago office appraisers we have observed that the office market continues to decline in high tax areas. The overall office vacancy in the Chicago metro market has declined to 14.4% in 2013 from 15.1% in 2009. According to Costar the high tax south suburban area we have analyzed went from 15.1% in 2009 to 22.7% in 2013. Average rents in the south suburbs declined from $16.35 in 2009 to $14.15 in 2013. The high tax south suburbs office absorption levels have been negative for four out of the past five years.
MORE CHARTS COMPARING CHICAGO AREA OFFICE MARKET DATA
Going back to 2007 office deliveries have been virtually non-existent in these high tax south suburban communities. Despite the lack of new construction in years, the office vacancy levels are increasing and the rents continue to go down. The office rental rates per square foot average $22.47 in the Chicago metropolitan area versus only $14.15 per square foot in the high tax south suburbs. During our Chicago area office appraisal inspections, our office property appraisers are frequently hearing about the extraordinarily high real estate taxes from office property owners. These high property taxes have resulted in lower property values and create high risk levels for office investors. A south suburban office building with high vacancies can hemorrhage cash with real estate taxes at these levels. This Chicago south suburban area suffers from a very high level of foreclosures, short sales and bank owned office buildings. It is critical that Chicago office tax appraisers and other Chicago office appraisers recognize the very different market conditions in differing locations of the Chicago office market.
(773) 763-6750
1234 Sherman Ave.
Evanston, IL 60202