The worldwide pandemic of Covid-19, has led to the shutdown and/or curtailment of large portions of the economy in an effort to slow the spread of the disease, which threatens to overwhelm the US health care system.  The short-term impacts of the business closures, shelter in place orders and self-quarantines have led to a drastic increase in unemployment and a dramatic decline in economic activity.
There is no certainty on how long the economic impacts will last.  The likelihood is that a full return to "normal" economic conditions will not occur until the process of development and distribution of a vaccine is complete, which would give people confidence to resume normal activities.   Unfortunately, the vaccine development process has been projected to require at least a year, and possibly more.
Attempting to project the reaction of real-estate market participants in this environment is difficult, to say the least.  It seems likely; however, that market participants will look to the most recent severe economic shock as a baseline to anchor their expectations.  No matter whether buyers and sellers believe the impacts will be greater or lesser, the recession of 2008 will likely be the yardstick against which the impacts of Covid-19 will be measured.
The "great" recession of 2008-2009 resulted in a decline in GDP, from peak to trough of between 4.3%[1] and 4.7%[2], depending on the source and the endpoints selected.   John Weinberger, Federal Reserve Bank of Richmond, in the article Effects on the Broader Economy (of the 2008 recession) reports that " US gross domestic product fell by 4.3 percent, making this the deepest recession since World War II. It was also the longest, lasting eighteen months. The unemployment rate more than doubled, from less than 5 percent to 10 percent."[3]  In terms of GDP and unemployment the 2008-2009 recession was the most severe since World War II.
[1]  John Weinberger, Federal Reserve Bank of Richmond, November 22, 2013
[2] David Geltner, Massachusetts Institute of Technology, Department of Urban Studies & Planning, MIT Center for Real Estate, January 2013
[3] John Weinberger, Federal Reserve Bank of Richmond, November 22, 2013

Currently, in an interview published April 6, 2020, Janet Yellin, former Chairman of the Federal Reserve stated that  “If we had a timely unemployment statistic, the unemployment rate probably would be up to 12 or 13% at this point and moving higher," and also she said (second quarter) gross domestic product is "down at least 30% and I’ve seen far higher numbers.”[1]   These figures indicate that the severity of the economic downturn is already greater than that of the 2008-2009 recession, and are expected to worsen from here.
In terms of real estate, the 2008-2009 recession resulted in peak to trough declines in overall real estate values of 45%. Various categories of commercial property value faced declines ranging from 36.8% to 41.9% depending on property class.    In this analysis, we have drawn price data from Moody’s/REAL Commercial Property Price Indices or Moody's CPPI.[2]   In graphical form, the decline in prices during the 2008-2009 recession is apparent.
[1] Jeff Cox, CNBC interview of Janet Yellen, https://www.cnbc.com/2020/04/06/janet-yellen-says-second-quarter-gdp-could-decline-by-30percent-and-unemployment-is-already-at-12percent-13percent.html.
[2] Moody’s/REAL Commercial Property Price Indices, April 2011, and December 2016 (graph) 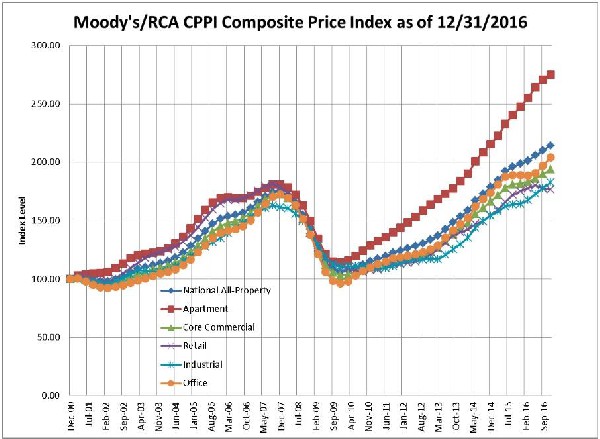