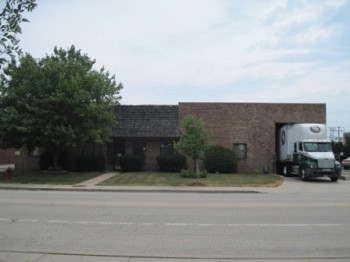 (This archived article was published in 2012.  More recent data is found inthe articles section of our web site). Since the recession in 2008 the limited number of transactions, the increasing number of distressed sales and the disconnect between buyers and sellers, have made valuations particularly challenging in Illinois. The severe economic downturn has resulted in a significant decline in commercial real estate sales activity. The lack of sales volume can lead to erratic property value conclusions which could impact the assessment and appraisal process. Anecdotally, we have heard frustration expressed by other appraisers and lenders, that even for transactions not affected by distress, it is difficult to make sense of adjustments for property characteristics. Similarly sized buildings with similar characteristics that look the same on paper often now sell at vastly different prices per square-foot.  We frequently encounter commercial appraisal situations where the comparable sales reflect property values that are literally all over the map. This is especially disconcerting in industrial market such as Elk Grove Village and Schaumburg, Illinois (Chicago suburbs), which historically have been among the more uniform and predictable. Differences in such characteristics such as property age, occupancy, office build-out, site area, ceiling height, dock loading, location and building size could be parsed to develop reliable opinion of property values. As recently as 2006, the influence of these factors were borne out by a rare econometric study on improved industrial property prices. In a 2006 study by McDonald and Yurova “Are Property Taxes Capitalized in the Selling Price of Industrial Real Estate?”[1]the authors investigated whether higher Cook County (Illinois) real estate tax rates are reflected in the ultimate sale price of industrial buildings. They also measured the impact of certain property characteristics such as ceiling height,truck docks, size, etc.They evaluated419 industrial building transactions in the O’Hare, which occurred in the time period from 2001-2004. The study also elucidated many of the factors that contribute generally to industrial real estate value. They found for example that manufacturing buildings sold for 31.7% more than office-service buildings and for 21% more that warehouse-distribution buildings using data from Cushman Wakefield's industrial database. Other findings included: ? Unit price per square-foot declines with age by 1% per year; ? Unit price increases with occupancy, but at a decreasing rate; ? Unit price increases by 0.59% for every 1% increase in office space; ? Each additional 1,000 square-feet of land increases selling price by 0.07%; ? Unit price increased by 1.47% for a 1-foot increase in ceiling height; however, this relationship does not hold for manufacturing buildings; ? The greater number of dock door per 1,000 square-feet adds to value, but at a diminishing rate; ? An increasing in building size by 10,000 square-feet reduces selling price by 5.5%; ? Proximity to O'Hare affected value, but proximity to the CBD or a highway interchange did not; ? Lastly, prices increased steadily over the time period studied (2001 to 2004, so that sales in 2004 were 19.5% higher than in 2001. Faced with the challenge of trying to reconcile the traditional indicators of industrial property values, with recent transactions in the market, the Peterson Appraisal Group made a study of several smaller industrial building sales in the Elk Grove Village and Schaumburg, Illinois areas. It was not our intention to attempt to replicate the McDonald study summarized above. Those results were reported mainly to substantiate the characteristics that have generally been considered of primary importance in influencing industrial property values. We did not apply any higher level mathematics or econometric modeling. We simply wanted to see if there was any factor, or set of factors, that was readily apparent, that might help to explain the wide divergence in the pricing that we had observed in our appraisals. In so doing we evaluated the apparent impact of several variables on industrial property prices such as ceiling clearance, truck docks, office area, etc. In order to measure the variables we looked at property sales in Elk Grove Village and Schaumburg, Illinois between January 1, 2010 and February 15, 2012. These communities have vast numbers of industrial buildings and similar locational characteristics. We limited our study to post January 1, 2010 since most of the value declines from the recession had already taken place and we didn't believe any significant adjustments for market conditions (time) would be needed. We further limited the buildings to those between 5,000 and 50,000 square feet that were constructed between 1969 and 1979. Older buildings were evaluated to help mitigate the effects of age on value. We used Costar as our data source. Only single tenant properties were considered so that we reduced the impact of long term leases that might skew results. The other major variable we controlled for was land-to-building ratio, which also can impact value. We mathematically adjusted all of our data to reflect a similar land-to-building ratio of 2.50:1 as the majority of the buildings in the data set tended to cluster around that ratio. We ended up with 23 data points in our analysis. The data points are reflected on the chart below with building size on the horizontal axis and the sales price per square foot on the horizontal axis. 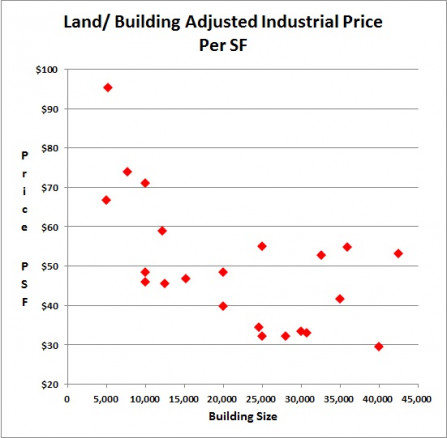 The data in our analysis would loosely show that smaller buildings tend to sell at a higher unit price than larger buildings as would be expected. But this is about all it shows. For buildings over 10,000 square-feet the sales appear to cluster either in the low- to mid-$30 per square foot or in the $50 per square foot range. On paper, however, these properties look very similar. The buildings in the low- to mid-$30s per square foot are just as likely to have higher ceiling clearances, more office space, more truck docks and younger building age as the buildings that sell in the $50s per square-foot range. Something else, apart from differences in physical characteristics maybe contributing to as much as 35-40% of the variation observed in improved property prices, which is an extremely wide gap. The marketing time for these buildings is very long. Costar reported marketing times on 13 of our 23 data points which ranged from 37 to 717 days with a median (middle) of 447 days and a mean (average) of 424 days. (Some properties are listed serially so that the actual time on the market may be longer). We also looked at the spread between asking price and sales price, which was substantial. Eleven of our data points reported the asking price as well as the sales price. The ratio of actual sale price to asking price ranged from a low of 61.3% to a high of 89.9%, with a median of 80.2% and a mean (average) of 79.8%. We suspect that the stress of the economy is impacting the sellers' ability to hold out for more money and in some cases settle for a lower property sales price. These are not necessarily distressed sales, but simply sales where the owner cannot afford to risk holding on to the property for another six months or more if they don't take the offer at hand. Limited transaction volume (at least in Northern Illinois) and lack of transparency give property buyers a decided upper hand. Costar Analytics reported transaction volume was reduced by over half from the mid-2000s to today for the market area covered in our study. A 30,000 square-foot industrial building in this area appeared to be just as likely to sell for $32 per square-foot as for $50 (even after looking at various adjustments). In gross terms that could reflect a spread from $960,000 to $1,500,000 for this hypothetical 30,000 square-foot building or a 36% difference.  This is an enormous spread and yet the market evidence that exists may easily lead to either conclusion. This seemingly defies logic given that the principle of substitution holds the rational buyer would purchase the lower priced of two similar buildings. The scarier part is that industrial buildings, particularly in this area, were historically one of the most uniform and predictable property classes in metropolitan Chicago. What does this imply for other commercial property sectors that were never as predictable? A lack of transaction volume can create severe measurement problems for the market. The implication for an ad valorem assessment in the Chicago area is that there is substantial possibility of skewed and erratic assessments; particularly for more complex properties than industrial buildings in less homogenous areas than Elk Grove Village or Schaumburg, Illinois.  Inconsistent sales data will substantially increase the chance of assessment error and make the assessor's job much more difficult to perform. Building owners in the Chicago area may be in particular need of competent commercial tax appraiser to insure equitable assessments for their properties. For Illinois bankers there is a substantial increase in collateral risk. Higher loan-to-value ratios may be needed as a hedge against this uncertainty.[1]McDonald, John F., PhD, and Yuliya Yurova, “Are Property Taxes Capitalized inthe Selling Price of Industrial Real Estate?” The Appraisal Journal, Summer 2006, p 250-256.
(773) 763-6750
1234 Sherman Ave.
Evanston, IL 60202